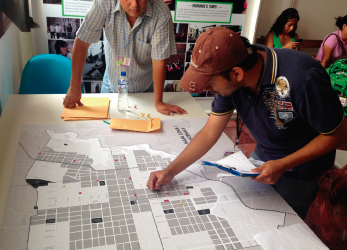 Issues:
Guatemala City lacks the mechanisms for increasing access for population below the poverty line to urbanized land and decent and affordable housing, located close to employment sources, provided with equipment and transport.

Project objective:
To innovate municipal management in the social housing field, particularly in the land access mechanism and in being a replicable model. Specifically, it is a pilot project, which consists of a housing complex in the form of apartments for 50 families (apartments), approximately 225 inhabitants, prioritizing families below the poverty line and in extreme poverty; 92% of them have a monthly income between 1.5 and 3 times the minimum wage. 72% of households in the city and its outskirts are under the poverty line, INE-ENCOVI 2017). The project is managed by a cooperative whose partners have access to housing through use and habitation rights. It includes mothers head of households as 50% of the direct beneficiaries, Mayas and Garifunas as 15%, and households with income sources from the formal economy as 30%, (EMVDU, 2018). Through the renovation master plan that, in addition to the housing project, includes an ecological park and equipment, 42,700 inhabitants of area 17 are benefited.